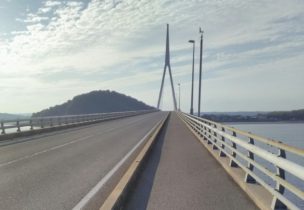 Starting from the off road cycle track (Veldrome), 2km north of the down town Hofu, we cycled in a northerly direction descending for a km to the intersection with the 184.

Turning left onto the 184 we took the rather pleasant, tarmac cycle track, which is on the eastern side of the road, overlooking the Saba River. A few hundred metres after passing under a shinkansen track and a three lane highway we veer to the right just after the Shirasaka Park. From here there is an excellent raised cycling lane that runs for 7km along the easterly bank of the river. This is a quiet, good quality cycle lane with no cars allowed. It provides excellent views over the river Saba as the river gradually widens into an estuary. There are numerous crossings of the river, the penultimate one being a rail crossing. We took the final road crossing, a 300 metre road bridge that forms part of the 58.

Follow the 58 for 2km across an expanse of fields and we pass over another small river crossing. 50 metres after the river crossing take a we left turn at a set of traffic lights. From here we follow the road south through a small village. This road runs parallel to the slightly larger 25, on the right, and river on the left. One kilometre after beyond an odd shaped community centre (ran ran dome) on the left the road eventually reaches a large solar farm which again is located on the left. We took a right turn and cycled the 300m to the intersection of the 25 and turned right onto it. For a good tour of the peninsular we decided to follow the 25 for 6 km passing the rather pleasant, southerly facing, Chudo Beach at the tip of the peninsular. 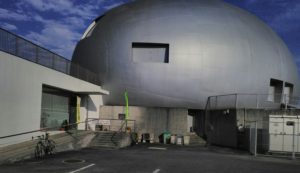 At the intersection with the 61 there is a set of traffic lights. The junction is clearly sign posted and we took a left turn on the 25 towards Ube. This road is a little busier, although there is a reasonable (3m wide) cycle lane on the right hand side. Passing across fields for a couple of kilometres we arrive at the architecturally distinctive Suo-Ohashi Bridge, a 1km bridge that spans the Fushino river that flows down from Yamaguchi City. 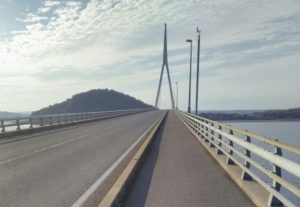 Fujioyama Park, one kilometre beyond the Suo-Ohashi Bridge, is a small play area located on top of a hill. We were tempted to stop attracted by what appears to be a long slide that descends the hill but decided to continue.

A set of traffic lights mark the intersection with the 212 (a toll road). We continue a further kilometre along the 25 until the intersection with the 190. We turned left here on to the 190 following the road south towards Ube skirting the village of Ajisu. Ajisu is home of Yamaguchi Expo which consists of a number alien looking buildings that a used for large conferences and international exhibitions.

Continuing south along the 190, it became increasingly apparent that we were entering the suburbs of Ube city. If we continued along the 190 we would have eventually arrived in downtown Ube. On this occasion we decided to turn right and follow the 219 north towards Sanyonodo at the intersection of the 190/219.

The 219 is quite a busy road but has a wide cycling lane that we ride on. A kilometre later, after passing underneath the 6, we arrive Katakura hotspring. We leave the 219 and weave our way north for 3km, through Katakura, eventually re-joining the 219 to the north of Katakura village. Following the 219 north for a further 5km of cycling, we arrive at the intersection with the  490 where we turned right and cycled along the road for a kilometre until the intersection with the 216 where we turned right, heading in an easterly direction.

The 216 is a quiet rural road passing initially through an agricultural area before the fairly extensive woodland of the northern fringes of the Ube 72 golf club and estate. Cycling for 8km along the 216 we arrive at the intersection with the busier 190 where we turn left in a northerly direction. For a kilometre, or so, we briefly retrace our tracks along the 190 but, rather than taking a right to the Suo-Ohashi bridge at the intersection of the 25 we continue north on the 190 for a further 3km until the intersection with 2.

Being close to Ogori, where Shin Yamaguchi is located, we were tempted to take a short diversion for lunch downtown in one of the modern fast food restaurants   However we decided to venture on and turn right on the rather busy 2. The 2 is a 200km road that runs from Hiroshima in the East to Shimonoseki at the South Western tip on mainland Honshu. Thankfully the 2 has a wide cycling path on its southern flank that we follow for 5kn until the intersection with the with the 187 where we turn right towards Central Hofu. after 500 meters we cross the River Saba and take an immediate left joining the cycle path that runs along the banks of the river. From here we cycle the 7km along the river bank and return to our starting point at the Velodrome.