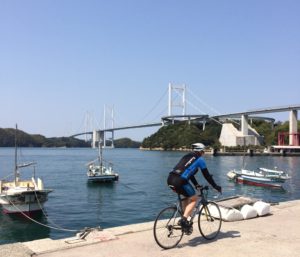 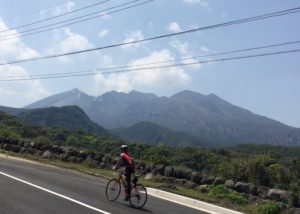 Cycling Diary: April Rail and Cycling Tour Day 1 to Sakurajima, Kagoshima This is our cycling diary for a day in April to Sakurajima in Kagoshima.  Sakurajima is easily accessible for cyclists from Kagoshima via a pleasant ferry ride with a good view of the active volcanic mountain of Sakurajima.

【Cycling Diary】Road to Hagi : coast to coast across Yamaguchi

Breakfast in preparation for a long day in the saddle. Departing from Tonomi (Hofu, Yamaguchi) 山口県防府市富海 we took the coastal road west to intersect with the 58 on the outskirts of 防府 Hofu. The views over the inland sea towards Kyushu were stunning and I knew we had chosen a good day for a long […]

Tsunoshima 角島 Bridge is relatively new (opened in 2000) and connects between Yamaguchi Prefecture’s 山口県 Shimonoseki city 下関市 and the Tsunoshima Island.  The view of the slender bridge structure over the sea sparkling in emerald green is impressive and it was ranked 3rd in the world in the best seller “Places to go before you […]