You may notice that many Japanese cyclists (usually using ‘mama chari’ or town bikes rather than road bikes) ignore traffic rules and seem to get away.  It is not uncommon to see people riding while holding umbrellas, having their whole bikes covered in a rain parka, or carrying a passenger on the back carrier.  For a country in which so many people get around by bicycle, Japan was surprisingly hands-off regarding regulations for cyclists for years.  It is not usual for offenders to get caught ending up with a fine, but this may change as a set of new laws for the two-wheeled modes of transport were enacted in June 2015.

Before stating about the new law, we want to mention the basics.

The basic traffic rules in Japan are fairly similar to those of UK where both cars and bicycles drive on the LEFT side of the road.  Bicycles are classified as small vehicles, so cyclists have to follow the traffic rules for vehicles generally.  You may see many Japanese cyclists ride their ‘mama chari’ on pedestrian paths 歩道, but they havey to cycle on the road for vehicles 車道 whenever possible.

Officially any bicycle in Japan must be equipped with a working front light, bell and a rear reflector.  All bicycles must be registered for anti theft purposes with local authorities.  This can be done when purchasing your bike with a small cost.  Simply fill out a form and the store staff will issue you a special sticker to be attached to your bike.  This system is useful when your bike is lost or stolen, as there is a high chance that it will be found thanks to the registration sticker.

You are not legally required to take out insurance for cycling.  Wearing helmets are only mandatory for those under the age of 13.

New Laws for Cycling from 2015 The new laws introduced in June 2015 for two-wheeled foot-powered vehicle in Japan do not significantly change existing traffic rules.  They ensure that prohibited behaviours are prevented by introducing a requirement for offenders to take a bicycle safety class and/or pay fines. The new policy says that if you are caught doing any of the 14 traffic violations twice or more in a three-year period, then you have to take a  bicycle safety class, costing 5,700 yen.  If you do not attend the class you will be fined up to 50,000 yen.  Keep in mind that the laws apply to everyone aged 14 and older including foreign tourists, and the two-strike policy is cumulative all over Japan.  If you are caught twice anywhere in Japan, you will have to attend the bicycle safety class or pay the fine before you are allowed back on the road.

So what are these 14 violations?

Another pretty straightforward one.  Do not ride when you see these signs. 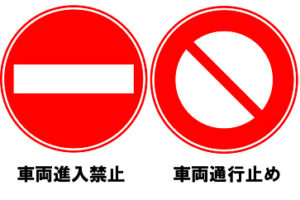 3. Riding on pedestrian only footpaths/side walks

Since bicycles are classified as small vehicles, the law states that they must be ridden on the road for vehicles 車道 whenever possible, unless the operator is a child.

You are allowed to cycle if you see signs like the one below that allow for bicycles to be ridden on ‘Hodo’ 歩道, the same stretch of pavement that pedestrians are using, but cyclists have to yield right of way to pedestrians and are also expected to ride at slow speeds when on sidewalks to avoid collisions.

4. Riding in the wrong lane

This violation is different from No.2 but refers to when cyclists ride in wrong lanes such as riding in bus only lanes, or turning right while in ‘straight only’ lanes.

The basic rule is to ride on the left side of the far left lane.

Always yield right of way to pedestrians, and maintain a safe, slow speed whenever you are sharing a road with them.

6. Crossing railway when  barriers are down and/or signals are flashing

It is obvious that you are not advised to cross over the railway line when the lights are flashing and the guard rails are down.

But even when there is no obvious sign, you always need to stop before crossing railroad tracks to ensure that no train is coming.

When you get to an intersection, be sure to stop, check to see who has the right of way, then proceed carefully.

If you’re making a right turn across an intersection (the equivalent of a left turn going across the intersection in right-side driving countries), and you have to wait for traffic to make your turn, be sure to leave enough space to let the drivers behind you who want to go straight.

Be sure to enter, ride, and exit observing all traffic rules. 11. Not stopping at crosswalks

This is another item on the list to emphasize how cyclists are expected to give pedestrians the right of way. If you are on a bike and you want to make use of a crosswalk, then you have to stop before crossing if there are pedestrians also using it.

12. Riding a bike without working brakes

Note that having brakes on only of your wheels can get you in trouble too; both the front and rear wheels need working brakes.  You need to be able to stop the bicycle within 3 metre distance using the brakes when running at 10km/hour speed.

13. Riding under the influence of alcohol

Do not drink and drive.  Like driving cars, riding bicycles after even a single drink of alcohol is forbidden.

This basically covers anything else that could be considered unsafe while cycling.  This includes, but is not limited to, riding one-handed, holding an umbrella, and using a earphone and/or mobile phone while riding.

After the introduction of the new law in June, 7,924 penalties were issued nationwide in the seven months in 2015, according to the National Police Agency.  There were seven cyclists who had to take bicycle safety class.  Many of such offenders rode without working brakes, some ignored traffic lights and others actually caused an accident.

The most common offenses were ignoring traffic lights amounting to 3,419 cases.  This was followed by passing under railway crossing barriers, cycling while using mobile phones, and failing to stop when required.

According to National Police Agency of Japan, while bicycle related accidents are actually falling (109,269 in 2015 down from 188,338 in 2014 nationally), the ratio of fatal accidents to the whole rose to 13.5 % over the same period.  In Tokyo alone, about 11,000 cyclists still had accidents, with 33 losing their lives in 2015.  Because of this, the Traffic Safety Committee in Tokyo are considering to introduce further measures to prevent accidents and curb fatalities such as making helmet use to be mandatory.