We needed to take a road bike from England to Japan on international flight, so bought a bike box or 'pod'  from Chain Reaction Cycles.  This is basically a suitcase for a bike which is semi rigid, made of sturdy EVA (Ethylene Vinyl Acetate) foam.  It costed £100 which was at a promotion price (reduced from […]

【Cycling Diary】Road to Hagi : coast to coast across Yamaguchi

Breakfast in preparation for a long day in the saddle. Departing from Tonomi (Hofu, Yamaguchi) 山口県防府市富海 we took the coastal road west to intersect with the 58 on the outskirts of 防府 Hofu. The views over the inland sea towards Kyushu were stunning and I knew we had chosen a good day for a long […] 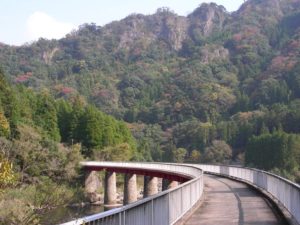 This road utilizes abandoned Yabakei railway tracks by the mountain side.  There are attractive sights nearby such as Yabakei Gorge, a rock tunnel from Edo period and old iron bridges and abandoned platforms. The gradient is not steep and the natural scenery is very attractive, especially in Autumn with red maple leaves, hence the name.