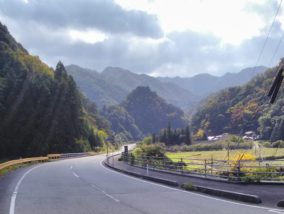 From Shunan 周南  a most rewarding cycle ride is north along the 315 to Ato 阿東 district returning via Lake Ohara 大原湖 on the 439. Cycling through remote parts of Yamaguchi 山口 you will encounter mountains, lakes, orchards with endless breathtaking views. However, with almost 2,000 metres of climbing and 140 km of cycling, this ride isn’t a ride for the faint hearted.

From the south coast, take the 27 through the Onsen village on Yuno 湯野 ascending the western slopes of Mount Himatsuyama for 7km before taking the 192 for a further 5km until the intersection of the 180. Turn left and follow the smooth road down hill for 3km to a T junction at the 376 where you take a right turn. The road is quiet, passing through the village of Wada 和田, you cycle up a beautiful river valley, until you reach the village of Takase 高瀬.

Takase marks the start of a slightly more strenuous ascent out of the valley in the direction of Kano 鹿野. The longer but easier and more picturesque route is to take the right turn and follow the 376 ascending on the road for 8 km to dam at Lake Takase 高瀬湖.

From the dam follow the small road around the Lake going in a northerly direction for approximately 10 km. Eventually this provides access to the road to Kano. There are several points where you can cross the Lake and on a pleasant day it may well be worthwhile spending a little time exploring the area, indeed there is a camping site to the northern end of the Lake should you want to spend a night there. Leaving the Lake and the northern shore look for the intersection with the 9 where you will turn right to follow the road to Kano.

There is a slightly more challenging, but shorter route, from Takase to Kano. In Takase, turn left onto the 180, and after 50m take a right. There is a wood on the left hand side of the road and houses on the right. Follow this road past all of the houses on the right and less than a kilometre later the steep road becomes completely engulfed by dense woodland. From here there is a steep climb of no more than 2km, but it feels longer. The climb ends at the intersection with the 9 where you need to go straight and descend from the woodland onto a more open road. Here the 9 undulates alongside the Chūgoku Expressway 中国自動車道 for another 6 km, passing by the rear of an expressway service station, and eventually arriving in Kano.

Kano is a remote town on the intersection of the the 9 and the 315. On the north eastern side of the intersection is a handy supermarket that makes a natural break to top up on provisions before continuing. We turned north on the 315 and begin the 8 km climb over Mount Azamikadake. Much of the road is tree lined we took this ride during late October, I can imagine the area could be quite spectacular in early November when it would be peppered with red leaves from the acer trees. During our climb, averaging maybe 5-6%, we passed at least 5 coffee shops before our final push to the peak at 585m.

The descent from Azamikadake is more exhilarating. It is fast and at one point there is a 360 degree turn where the road passes underneath itself. After 5 km descent we arrive in to Yunokijisho, which has a handy Onsen for tired legs.

In Yunokijisho, it is possible to take a left turn on to the 123, where a 20km ride to take a scenic short cut on a gentle descent towards Lake Ohara. However, we decided to continue along the 315 and begin a 430m climb over the western flanks of Mount of Nodoyama. At the top of the climb there is a 1km tunnel so it is worth having lights to ensure visibility to any overtaking vehicles. Emerging from the tunnel there is a beautiful 4km smooth descent, passing Lake Nomichi to Tokusa 徳佐.

On the 9/315 intersection, Tokusa, with several supermarkets, offers a useful stopping point to top up on provisions and water bottles. Taking a right turn onto the 9, it is only 15km to the historic town of Tsuwano 津和野  with its castle and local Onsen.

On this occasion we turned left on to the 9 and pass through the apple growing orchard region of Ato. Never can I recall passing so many shops specialising in the sale of apples as I did during my 10km cycle on the 9 to the west of Tokusa.

At this point, to the north of the 9, there are tree covered hills which are apparently spectacular during the fall of early November. We ride along the 9 in a south easterly direction for 10-15kn to a small village called Nagusa where we turn right on to the 489. The 10km ride to Lake Ohara involves a gentle climb passing through rice paddies before descending to the lake itself.

Those who chose the shorter loop by taking the 123 will intersect with the 489 just before Lake Ohara 大原湖. 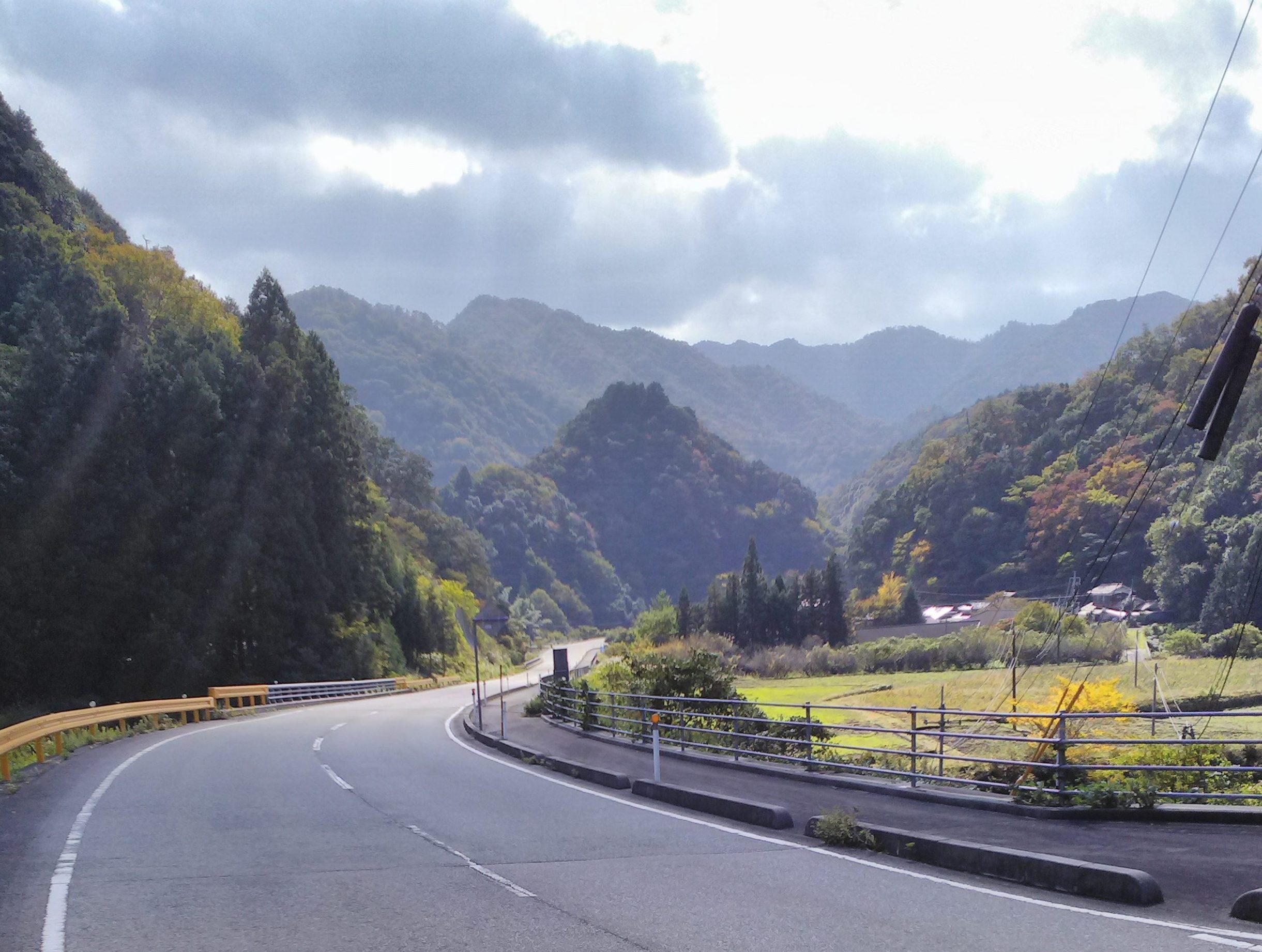 In season, Lake Ohara is a tourist honeypot offering fishing, hiking and numerous outdoor activities associated with the Lake. There are 30, or so, holiday cottages on the north western shore along with shop and information centre. There is also a camping site here too. In the Spring, the cherry blossoms are particularly picuresuqe and shimmer off the Lake During the Autumn, red leaves of the deciduous tress pepper the surrounding hill slopes.

This man made Lake, at an altitude of 230m, is approximately 8km long and perhaps 2km wide. The main north south cycling route is the 489 which runs along the western shore, however, there is a road that circumnavigates the Lake and with due care it is possible to tackle this using a road bike.

Leaving the Lake behind, we followed the 489 south along the Saba river. South of the Lake we cycled through a 400 metre tunnel followed by a short 9% descent and climb before a 10km gentle but swift descent to Tokuji 徳地. The area still feels remote and the main industries appear to be agriculture and woodland management. Indeed, the are a number of saw mills that are located in the villages along the banks of the Saba 佐波.

In one of these villages, Tokujiyusaka 徳地湯坂, it is possible to pick up the Sabagawa 佐波川 cycle route. This is a dedicated cycleway that follows the banks of the river Saba from here for 25km to Hofu 防府. It is a tarmac cycle route was opened in the early 2010’s. The path is wide enough for two cyclists to ride alongside one another and provides an excellent alternative to the 489. Whilst this would be my recommended option, do take care as the occasional local farmer might be tempted to use this route to drive their tractor along!

Eventually you will arrive at the small market village of Tokuji. Tokuji lies at the cross roads of the 489 and the Kano/Yamaguchi roads. Whilst rather geriatrified, it is a bustling little place and an excellent location to stock up on provisions.

From ther the Sabagawa cycling route continues south for a further 15km to the coastal town of Hofu from where you can return to your starting point.