Rose early for large breakfast in preparation for a long day on the saddle. After the normal pre-ride technical checks of our bikes we made our way to our starting point at Hofu cycle track.

From there we descended along the road in a northerly direction and turning left at the intersection with the 184 picking up the cycle lane running parallel to the River Saba. We followed this for two kilometres until we reached an arched bridge, at the intersection with the 58/262. Turning right we crossed the bridge heading north, initially on the 58 but this turns into the 262 after approximately 500m.

Once on the 262, the first 3km is a steady 125 m climb out of the city. It is December, the air is cold but the climb nicely warms our bodies for the day ahead. At the top of this climb we pass through a 400m tunnel which we ride through on the 1.5m wide pavement which is neatly separated from the road by a 1m high hand rail. At first, riding through long tunnels can be quite disconcerting, partially because of the noise and partially because of the dark. As always, we proceed cautiously at no more than 10K/hr until we get through to the other side. Emerging from the tunnel there is a lovely 6km decent towards Yamaguchi. This stretch of the 262 is straight and smooth. There are number of small convenience shops en route to purchase snacks and essential carbohydrates for the ensuing journey.

At the intersection with the 21, it might be tempting to turn left to visit the sites and upmarket shops of downtown Yamaguchi city,  however we kept cycling north along a more undulating 262 to the intersection of the 9 where we turned right. Route 9 is a busy road that runs from Ogori all the way to Kyoto. We cycle along it for 3km stoping at a 7/11 for a Karagi (fried chicken) and ampan (red bean bun) snack in the sunshine before turning left onto the much quieter 196.

The 196 passes through the middle of a ginormous quarry operation with huge catapillar trucks dragging themselves at unbelievable angles up the side of the quarry face enmeshed with a cacophony of noise from the rock breakers. Whilst this might seem somewhat unappealing, the ride past the quarry takes no more than a couple of minutes before the road enters the remote feeling countryside which also marks the beginning of a more challenging 7-8% incline for 3km to Lake Miyano.

The road twists and turns its way up the hillside until we reach Lake Miyano, one of the reservoirs that waters Yamaguchi city.  Here, if time allows, it is possible to take a delightful 10km detour around the lake which despite its beauty seems little visited. Having circumnavigated the lake we return to the 96 and begin the 2.5km 10% climb out of the valley to the 262. The road here weaves back and forth up the tree lined hillside with occasional glances back down the valley towards he quarry and city of Yamaguchi beyond. Despite being only 2.5Km in length this climb does requires pacing, a low gear and reasonably strong legs. Just before completing the climb there is an opportunity to briefly look almost vertically down towards Lake Miyano some 250m below.

Emerging on to the 262 the landscape is agricultural and dominated by the production of rice on paddy fields. The 262 is a quiet road with an initial long 10km gently meandering descent into Asahi. Asahi is on the intersection of the 262, 309 and 10 and we stop here for a short break at Asahi road side café and shop. The ladies in the shop were very helpful in replenishing our empty water bottles with fresh mizu (water) and advising us on which bento to buy to help sustain us during the rest of our trip. 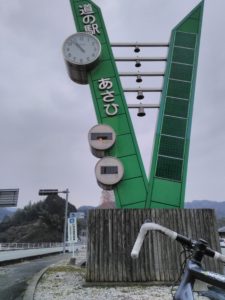 Asahi road side café and shop

From Asahi we turned right on to the 10 and immediately entered the picturesque village of Sasanami. Sasanami is a remote village half way between the historic city of Hagi, on the north coast, and the coastal city of Hofu in the south and is particularly famous for the quality of its Tofu. 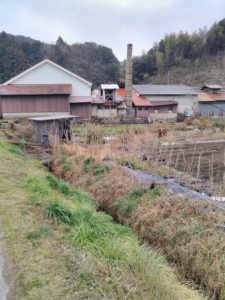 We follow the 10 east, following the route of the River Sasanami, into ever more remote countryside. After 4km the 10 turns north, at the intersection with the 359. The river valley begins to widen at this point and we become aware that we aware on the edge of quite a dry Sasanamigawa lake/reservoir, evidently it is the dry season. We are at the western edge of the reservoir with the main lake being a couple of kilometres to the east and not accessible from this shore.

Continuing north, the 10 narrows to little more than a track and incline on rises to 5% and over the next couple of kilometres we climb a 100 metres to the intersection of the 360. Turning right we continue along the narrow 10 and the incline gives way to a gentle 5km descent to the banks of the Abugawa Lake. Despite the gradient being quiet low (maybe 6%), we had to take care on our descent due to the twisting nature and narrowness of a damp, moss ridden road.

Abugawa lake is quite large and it is possible to cycle the twenty or so kilometres along a road that follows its shores. We cycled across a distinctive red arch bridge that spans, from the east to west shore, a narrow section of the southerly part of the lake. 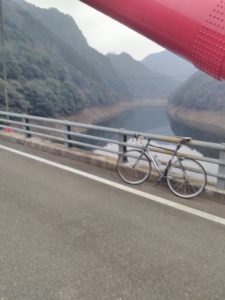 After crossing the lake it is possible to take a right turn onto a road that would then take the cyclist in a southerly direction, involving a 5km climb to provide shoreline access to the Sasanamigawa lake. Whilst we considered this option, we rejected it because of the onset of tiring legs and in the knowledge that we still had some challenging times ahead.

Returning across the red bridge we turned right, joining the 67, and continued to follow the banks of the Abugawa Lake in a northerly direction. Three kilometres later we encounter the large (maybe 100m in height) Abugawa Dam and hydro-electric power station and the 67 begins to climb in a westerly direction to the banks of the river Abu. Passing a village, folklore and river museum on the left about a kilometre before the entrance to the village of Kawakami. This is a small  village which consists of a scattering of houses, primary school and a government administration building.

We turned left to join the 360 and commence a 7km climb, averaging 5% in a southerly direction. The road is narrow through woodland. It is remote here. There is nobody else around and the area seems to be rarely visited and we feel quite excited about the prospect of being some of only hand full of cyclists to have ridden this road. With only a few openings the road, the road passes through dense woodland following the path of tributary to the River Abu which runs on our left hand side. The climb itself isn't too challenging but caution is required at this time of year (we cycled this route in December) due to the slippery nature of the moss covered surface.

We emerge at the top of the hill arriving at a T junction where we turned left to continue along the 360. Despite being at an altitude in excess of 300m, the road is much wider, smoother and relatively flat here. Swiftly cruising along for just over a kilometre we arrive at the intersection with the 10. We turn left and retrace our tracks downhill for 4km past the westerly flanks of Lake Sasanamigawa. If we had continued along the 10 we would eventually return to the delights of Sasanami however we turn left at the junction with the 359, a relatively narrow tree lined road, and begin a 200 metre ascent to the cross roads with the 262, the main road between Hofu and Hagi.

Crossing the 262, we continue along the 359 which itself was at one time the main road between Hofu and Hagi and is known as the Hagi-Oukan Highway. This is ancient route, initially constructed in the 17th century and there are numerous historical sites that are worth visiting along this section of the ride, if time allows. The road continues to rise at 6-7% for another 3km passing mostly through woodland before the final 0.5km of climb where the gradient increasing to 10% and we ride over the summit in to Yamaguchi City at almost 530 metres .

The Hagi-Oukan highway's 9km descent in to Yamaguchi is particularly rewarding for tiring legs. With occassional inclines of upto 11%, and the odd technical hair pin bend to navigate, there is a need for some caution and quite a lot of breaking. The road is generally in good condition and enables us to gather considerable speed, although with this comes with a chill factor and we are glad to have our wind proofs with us to protect our torso's from the cold December air.

Five kilometres into our descent we stop briefly at the Ichinosaka dam to admire the beauty of the compact Kinkei Lake in its mountainous and woodland setting. Kinkei Lake is a small reservoir that provides water to the city of Yamaguchi a little further downstream. Back in our saddle we ride a further 2km until the intersection with the 9, the main road which runs from Shimonseki to Hamada and marks the northern edge of the Yamaguchi city urban area.

We are tempted to stop in Yamaguchi at one of the many restaurants and cafe's downtown but, given the time, we decide to push on and followed the 62 a further kilometre until the intersection with the 2o4 where we turned right and proceeded to cycle a further 600m to the 21 and turned left. This route follows the Hagi-Oukan Highway and after 5km brings us to the intersection with the 262 where we turn right and ride along the now tiring 5km 125m climb to the 400m long tunnel that we passed through earlier in the day. Again, we ride through the tunnel cautiously on the 1.5m pavement that is separated from the highway by a 1.5m handrail.

Emerging from the tunnel we ride the 3km descent to the river Saba.Crossing the bridge we turn left onto the cycle path that runs along the banks of the river for 2km. Just before the highway and Shinkansen bridges we turn right and commence our final, but tiring short, climb of the day and return to our starting point at the Hofu Velodrome/cycle track. 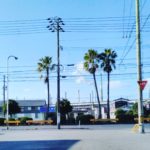 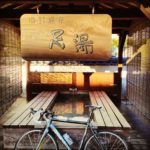 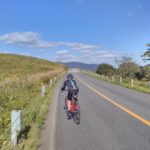 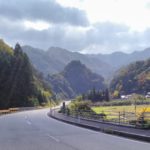 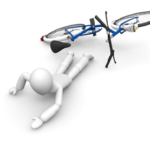 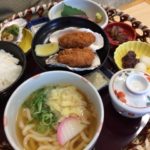 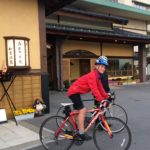