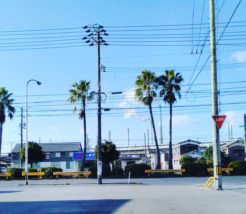 Shunan is an industrial city located in the southwest region of Yamaguchi prefecture. It is probably most synonymous with the petrochemical and steel industries with Idemitsu, Tosoch and Tokuyama and Nisshin Steel all having major plant located on the coast around the city of Tokuyama. Whilst this might sound somewhat off putting, we invite you to reconsider and allow us to take you on a cycling journey through the mountains and lakes of Shunan that are a distinctive, and much neglected, beauty of this city. During this challenging, 4-5 hour, 100km ride takes in three lakes, 1 beach and over 1500 metres of climbing.

Commencing at the Hofu off road bike racetrack and Velodrome, we descended for 700m in a southerly direction to a set of traffic signals on the sanyo expressway in Hofu.

Turning left, Ashikikuri temple is on our immediate left had side. We cycled along this quiet road for 1600m and when the road veers to the left we made a right turn descending for 400m to a set of traffic lights at the intersection with the main road that passes through the centre of Hofu. We turned left, in an easterly direction, and cycled for 200 metres before making our usual short short stop at the DO supermarket to get some provisions for our journey to Shunan.

From the supermarket we continued along the main road in a easterly direction. After 3km the local train line starts to run alongside the road. Where the road veers to the left, we took a right and crossed the rail track and descended along a narrow road, with houses on either side, to the coast. We turned left, continuing in an easterly direction, on the narrow coastal road and followed it, passing a pottery en route, for a couple of kilometres to the seaside village of Tonomi. For those of you so inclined, Tonomi has a wonderful beach and beautiful views over Japan’s inland sea towards the mountans of Kyushu. 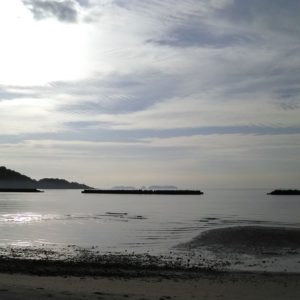 Upon leaving Tonomi, we joined the 2 and cycled over the (94m high) Tsubaki pass. The top of the Tsubaki pass marks the border between the cities of Hofu and Shunan. Upon entering Shunan city we are initially greeted by a 3km gentle descent but the road is quite busy and we need to take caution on this stretch. However there is a 3 metre wide cycle lane, located to the left of the carriageway, for those so inclined. This stretch of road has numerous 7/11 stores where it is possible to stock up on provisions, have a caffeine boost or simply use the free ‘western style’ toilet facilities.

From the top of the Tsubaki pass we cycled for 8km along the 2 passing underneath a bridge supporting the much larger Sanyo Expressway, through the village of Heta and then again underneath another Sanyo Expressway bridge. Immediately after we pas underneath the Sanyo Expressway for the second time, we encounter a set of traffic signal and turn right on to the 347 taking us away from the busy 2 and into the town of Fukugawa where we stop for a coffee and admire the bizzare contrasting sights of palm trees and refinery. 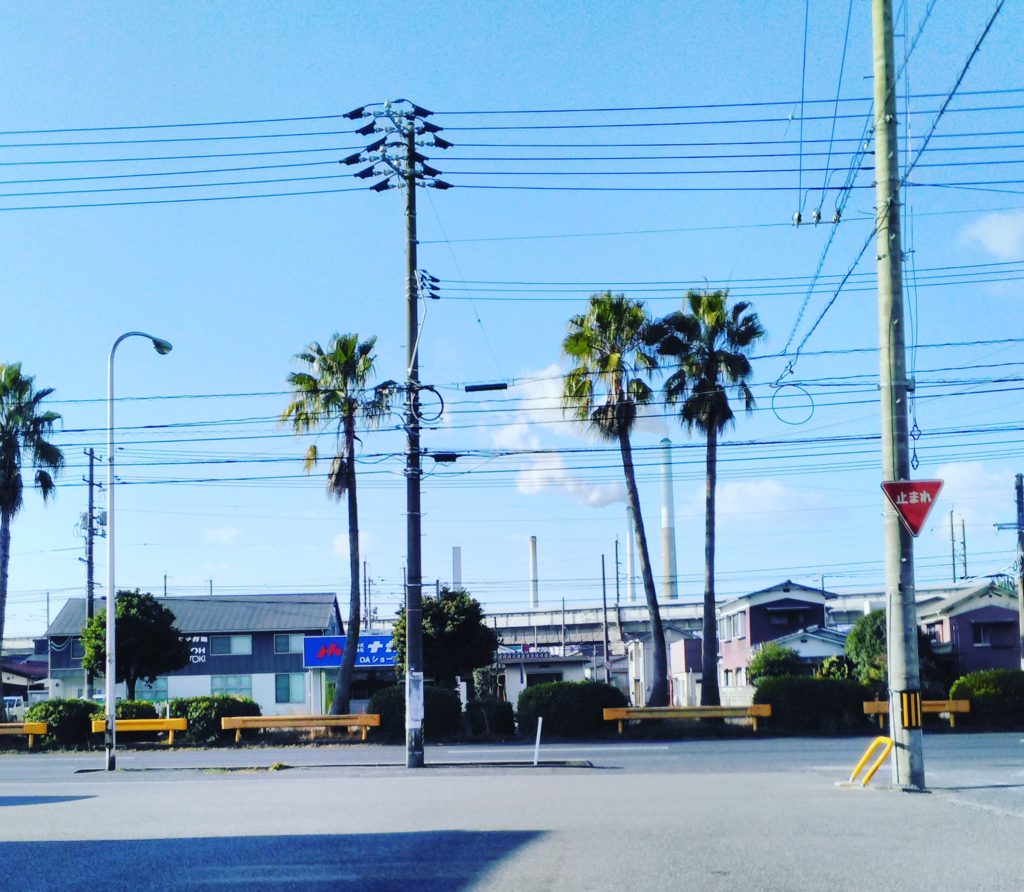 Coffee stop on route 2: palm trees and a refinery

Leaving the coffee shop behind we continue in an easterly direction along the 2. The Sanyo railway line is on our right side and after one and a half kilometers we pass Fukugawa Station. Cycling a further 3km we reach the intersection of the 3. A right turn would take us to the station of Shin_Nan Yo, we, however turn left along the 3. Over the next kilometre we encounter three sets of traffic lights before crossing the much larger route 2 and a kilometre later cycling, yet again, underneath the Sanyo Expressway.

The Sanyo Expressway marks the northerly boundary of Fukugawa, the road becomes much quieter with less traffic and suddenly we notice the river Tonda flowing on our right hand side. It is such a distinct contrast to the industrial landscape behind us. At the point the incline of the road gradually increases, initially to 1 or 2% but upon crossing the river Tonda increases to 8 or 9% enabling us to warm our bodies on this rather cold December afternoon. After a kilometre climb we encounter a short 150m tunnel, which we pass through cautiously, before turning immediately right to cycle up hill around a small park to Kiwakani Dam. We rest on the Dam for a few minutes eating a small snack and watching the tree or four small fishing boats cruising slowly on the beautiful lake Kiwakani beneath us. 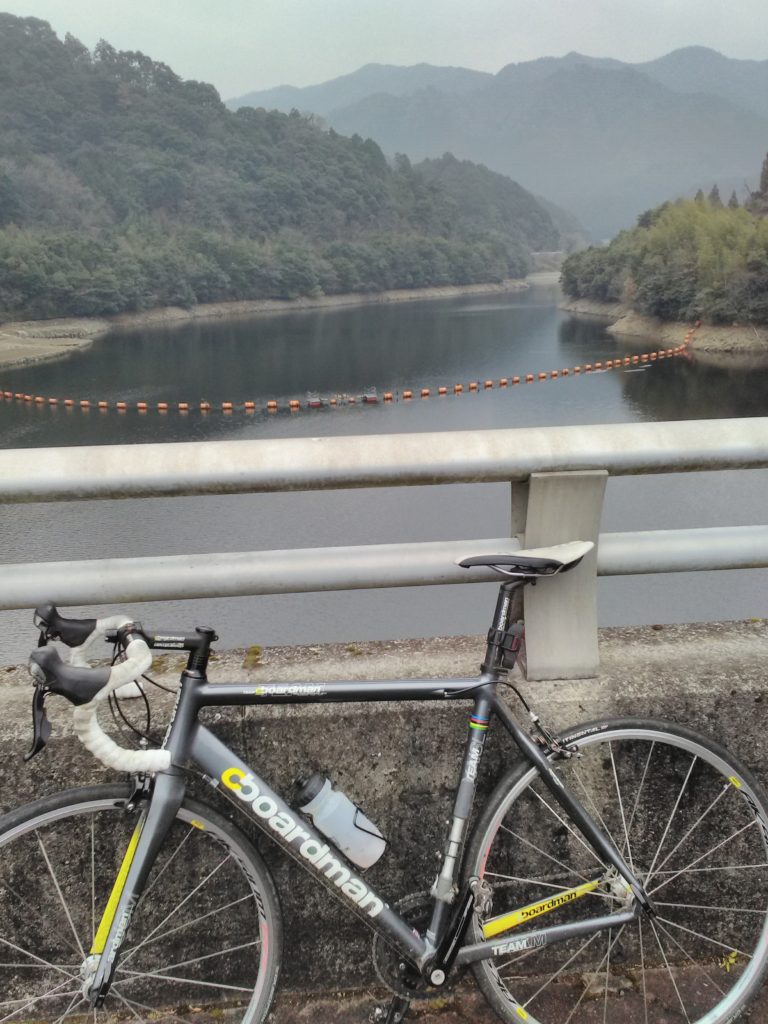 There is a narrow but reasonable tarmac 8km road that circumnavigates Lake Kiwikani. This is a route that we would have preferred to taken, however at 2pm on a cold December afternoon we thought it best to return to the 3 and continue on our journey to the next Lake. Returning to the 3, we turn left and travel in a northerly dirction, the lake on our left hand side, along a relatively flat stratch for 750m before the road begins to veer to the left and starts to climb away from the lake.

Leaving the lake behind, over the next three and half kilometres we climb 200 metres, on the 3, to an altitude of 310 metres. The road follws the flow of the river Setogawe, a tributary of Lake Kiwikani. We are exposed to the cold at this altitude and are pleased that we have our wind proof clothing with us to keep the cold air at bay. We turn right, on to the much appreciated flat 376. Alas the relief to our limbs is short lived as we turn right after 300 meters to resume our climb on the 3. A kilometre down the road we reach our peak at 410 metres before a gentle 1 kilomre descent to the 315, which we cross to enable to 200 metre cycle to the shores of Lake Kodo. 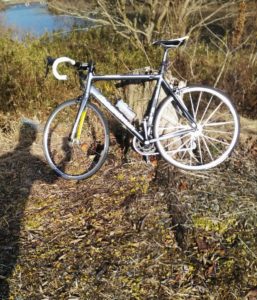 Bike and Rider at Lake Kodo by the 315

Lake Kodo runs north to south, parallel to the main 315. It is approximately 6 kilometres long and perhaps 500 metres wide. It isn’t possible to circumnavidate the whole lake by bicycle, however there are long stretches of track on both shores with a particularly noteable green bridge (allowing access to bikes and pedestrians only) that crosses Kodo towards the northern end of the Lake.

Departing from Lake Kodo, we follow the 315 north through a landscape of evergreen tree covered hills and rice paddies that run an either side of the banks of a river that flows through the valley. Exposed to a cold northerly headwind we draft our bikes and, sharing the effort, we cycle as quickly as we can over the undulating landscape to our next stop, 6km to the north, the town of Kano.

In Kano we stop at a supermarket, ideally located at the 315/9 junction. A handy, if not a little expenside place, to buy some carbohydrates and a drink. The front of the shop is perfectly south facing and allows us to sit outside and soak up the heat from the sunshine to warm our limbs whilst protecting us from the cold northerly wind that we had been riding into. 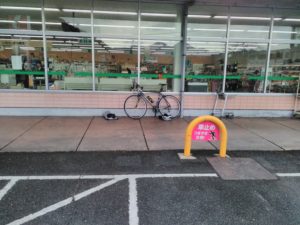 Time for food at Kano supermarket

Departing from our brief stop at the supermarket, we head west and follow the 9 for almost 7km. Initially we descend to pass underneath the Sanyo express way and then we climb about 80 meters to the intersection with the 180. One km before the 9/180 intersection we pass the rear of a Sanyo expressway service station. Here it is possible to gain access on our bikes should we want something warm to eat, drink or use the facilities; of course we would not be allowed to use the Sanyo expressway itself as bicycles are prohibited. 4km beyond the service station it is possible to take a left off the 9 to take the 1km tarmac track to Lake Takase. There is a 15km road that circumnavigates the serene Lake Takase, a diversion well worth considering on a warmer day but for now we continue to press on in a westerly direction.

Immediately after the turn off to Lake Takase we start a 12% climb for 600m (it seems further) before the 9/180 intersection. The 9 turns right and heads up hill in the direction of Tokuji. We veer left onto the 180 and commence a 2km 10% descent into the village of Takase. This descent, through woodland has a couple of hair hairpin bends, it is technical with occasional woodland debris to deal with and so it commands our respect. Eventually the road opens up with small cottages on our left hand side and a stream running to our right prior to our arriving at the 376.

A left turn on to the 376 would take us on a 5km, gentle climb, to Lake Takase. However, we turn right on the 376 following the route of the Shimaji river which runs alongside us for the 15km gentle, but swift descent into Tokuji. The agricultural landscape is periodically broken by a scattering of small, declining and geriatrifying villages. We pass two large, but mostly vacant, primary schools occupied by only a small number of children but which are of a size to have perhaps once been occupied by student population of 400.

Continuing downhill, the descent to Tokuji is swift following the banks of the Shimaji river which is marked by long sweeping bends on the smooth road that follows the meandering river. Arriving into to Tokuji we make a short stop at the Marykyu supermarket on the 376/489 intersection.

Leaving Tokuji behind we joined the Sabagawa cycle path and journey the 15km south along the banks of the river eventually returning back to our starting point of the Hofu Velodrome. 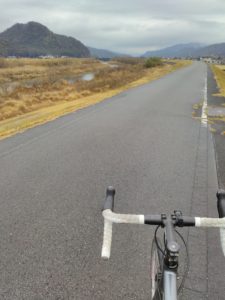