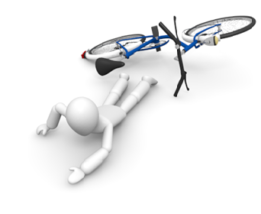 Japanese drivers are relatively well mannered and are normally aware of cyclists, but there is still the chance that you may be involved in a traffic accident. In this article I reflect upon my experience of being involved in an accident whilst cycling in Japan and try to advise on how to deal with the situation.

Time and Location of Accident

One October morning I was involved in an accident whilst cycling with another cyclist, through a city in western Japan. The time must have been between 7.30 and 7.45am because children were on their way to school.

Approaching traffic lights on a straight road, my accident involved being hit by a car which turned left, immediately in front of me without indicating. The car clipped my front wheel which resulted in me being thrown from my bike.Laying on the floor I realised that I had sustained an injury to my right shoulder and severe skin rash to my arm and bottom. The bike was slightly damaged with scratches to the frame and right pedal.

Following the accident the car driver drove to a safe place to park. He returned to check whether either of us were hurt. My pain was such that I didn’t want to move. The car driver called the police for assistance. I was a little resistant about him doing this but he proceeded to dial the emergency number 119 and requested the assistance of the police and ambulance. My fellow cyclist cycling right behind me was unhurt.

Both emergency services arrived on the scene within a couple of minutes. The paramedics placed my neck in a brace before undertaking a quick health assessment. Once complete the police decided that I should move to the pavement where I would be more safely located to receive further medical treatment.

My fellow cyclist took the lead in translating interviews by the police and also gave his opinion on the accident. The police who wanted to know details about how the accident occurred, the position on the road of the vehicle and bike involved and the general traffic conditions. They assessed the damage to the bike and the car. Other officers arrived and drew the positions of the vehicles on the road, made several measurements and took numerous photographs of the scene of the accident.

The police interviewed both parties involved in the accident. There appeared to be a desire to settle who was responsible there and then. I can only speak English but thankfully I was accompanied by a Japanese speaking cyclist who assisted in translating the information and providing further detail to the questions posed by the police. In this case the driver admitted responsibility for the accident. He was apologetic and proceeded to be helpful in assisting us acquiring appropriate assistance from both the police and the Japanese health service.

When the police had finished compiling their roadside report of the accident, and were happy that all those involved were safely positioned away from traffic, the driver insisted on taking us to his place of work, a nearby school, to have a further medical check up. At the school, the deputy headmaster and school nurse expressed their concern about the injury to my shoulder. They decided that they would take me to the hospital for a further check up. I was initially reluctant to do this however the school insisted upon this course of action. They probably decided this in case there were any physical damages that might result in later claims.

The deputy headmaster took me, accompanied by my fellow cyclist, to the hospital. Upon arrival he spoke to the receptionists about the accident. I was placed in a waiting room for a few minutes before seeing a doctor. The doctor did some checks on the mobility of my arm, shoulder and ribs. X-rays were taken before being examined by the doctor. The doctor informed me that nothing was broken but there would be severe bruising that would cause pain for a few weeks before recovering.

The doctor then discharged me.  I believe the deputy headmaster used the school’s insurance to pay for the medical costs. He then took me and my fellow cyclist with our bikes on to our destination.

Before making a claim I wanted to ensure that I was unlikely to suffer any long term ailments such as whiplash. I therefore waited a few days before pursuing a claim. I knew that the driver had paid for the medical attention that I received on the day of the accident and, given that my physical condition was improving as the doctor had advised,  I decided to only claim for the damage done to my bike and cycling kit.

My Japanese speaking friend assisted me with completing the necessary paperwork. This involved a description of the accident, details of the damage caused and an estimate of the cost of replacing damaged items. I then sent the completed paperwork to the driver’s insurance company.

The insurance company contacted me a few weeks later to confirm that my claim had been approved. To proceed I had to produce receipts for replacement kit and repairs to the bike. I also had to complete some further paperwork itemising the purchased goods.  I had to seek the help of my Japanese friend  because the paperwork had to be completed in Japanese. The completed paperwork was sent to the drivers insurance company and in due course I received the compensation.

What to do when accident occurs

Based on my own experience, here is some information you should be aware in case of such incidents.

Calling the ambulance and police

If there are injured people or broken vehicles, please move to a safe space to avoid causing a second accident.

Usually, the person who caused the accident takes responsibility and calls the ambulance and police. Nevertheless if someone is hurt and needs an ambulance, do not hesitate and call one immediately. The emergency number for ambulances is 119 in Japan. When the operator picks up, you will be asked whether it is a fire or you need emergency aid, so please respond “kyuukyuu” 救急 (“emergency aid”).  Afterwards, they will probably ask for the address, so please respond with your location.

Here is an English pamphlet about the 119 emergency.

Also, if someone else was involved in the accident, you must call the police（警察 “keisatsu”）. The number to call the police in Japan is 110. Let them know that an accident (事故 “jiko”) has occurred and they will come over and manage the situation at the site of the accident. If you do not know whether you should call 110, you can call #9110 for advice.

If your Japanese is not very good or is non-existent, it may be very difficult for you to hold a phone conversation with police and emergency aid. In that case, it might be best to have someone nearby call for you. Also, please remember pay phones are free to contact emergency numbers if there is one nearby.

If the police are called, they will ask for details on the accident, such as time and how it occurred. Please remember and confirm all the details surrounding the situation, such as time, people involved, who caused it and how, etc.

After the accident if you are the victim

If you are the victim in an accident, it is important to have all the right details, such as the time of the accident and traffic conditions, as well as the other person’s information such as name, address, contact details, vehicle registration number if applicable recorded there and then. You will need these in future discussions and claims.

Contacting your insurance company back home

After you have contacted emergency services, the next step is to contact your insurance company back home if you took out insurance policy before you came to Japan.

Even if it has been settled that you were the victim, make sure to contact your insurance company immediately. Depending on the situation, you may also need to contact an accident lawyer. Being on holiday away from home means that you are already in a different situation than your normal life, so there is a chance that the situation will become more difficult than it might be normally.

The insurance company will guide you through the necessary procedures, so please follow those.

Here is a list of country codes in case you do not know.

Of course it is imperative to get some sort of travel insurance before you arrive in Japan. There are credit card companies that offer secondary insurance as well. It is also important to know what numbers to call in case of an emergency wherever you go.

As we wrote in the article about cycling safety, cycling in Japan is generally safe but there has been an increase of bicycle accidents relative to the total number of traffic accidents in recent years. I myself have been a careful cyclist, but sometimes you just cannot avoid being involved in accidents like this wherever you are and how careful you are.