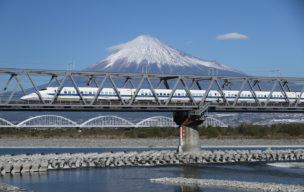 We cycled from Shin-Fuji to Mount Fuji Skyline Road via Fujinomiya on a day in April.  The highest point of this cycling route was 1460 metres above sea level.

Staying overnight at a hotel near shin-Fuji station this trip had one purpose: to cycle as high as we could up Mount Fuji.

Leaving our bags in the hotel we left early in the morning and rode to the local 7-11 convenience store to buy some bread and fruit for breakfast and some snacks to eat en route. The route from Fuji is relatively straightforward. Initially taking the 139 north for 3km’s, this then turns into the 414 that we followed in to Fujinomiya where we stopped again to take on more food. About 2km Beyond Fujinomiya railway station turn right on to the 180.

Passing Fujinomiya police station the skyline is dominated by the snow-capped peak of Mount Fuji. The road begins to steepen and soon becomes a relentless 10% incline as we climb through the outskirts of the town. Passing underneath the 468 really marks the edge Fujinomiya and the start of the countryside of the Fuji nature reserve. At this point it is worthwhile taking a short detour for a much needed rest at the beautiful Yamajima shrine.

Leaving the shrine we resumed our relentless uphill ascent along the 180. After a kilometre we arrived at a small café and indulged in fresh Mount Fuji spring water. This is one of only two roadside cafe’s during the ascent of Fuji and is worthy of a stop.

Although we were probably no higher than 600m the air was noticeably fresher here than in Fujinomiya. Drinking the Fuji spring water we enviously watched a cyclist fly past us on his decent off the mountain.

Continuing along the 180 the stunning views of Fuji helped to sustain our enthusiasm and provide some relief from the build up of lactate acid in our legs.The road eventually begins to snake its way up the mountain with sharp hair pins requiring extra effort to ride through. The woodland is relatively dense. Where there are the occasionally breaks in the trees it is possible to look over to Fujinomiya and the sea beyond. It hen become apparent to us that this is a serious ascent.

Altitude markers seem to appear randomly at the side of the road. We did feel a degree of satisfaction as we passed the one indicating that we were beyond a 1000 metres high.

After 16 hairpins on the 180 the road turns east but the climb continues at a constant 10%. Maybe a kilometre beyond the last hairpin we arrived at Omotefuji Green campsite where we stopped for a short break. The campsite has excellent facilities including a café, toilets, washing facilities and showers. We took on food and replenished our water bottles before continuing. 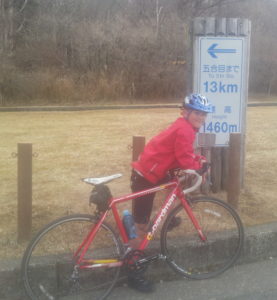 The trees are much smaller up here and we encountered snow on the side of the road. The air temperature is cold but the body is hot from the effort of the climb. At 1460 metres, if the weather allows, it is possible to turn left on to the 182 to continue the ascent up to the 5th Station where there are further shops a cafes. Here the road ends however for the very able it is possible to continue up hill, on foot to the top of Mount Fuji, however this would almost certainly require a overnight camping stop.

For us the 182 was closed due to the Winter weather from November through to May each year.

The descent from Fuji was invigorating if not somewhat hair raising. In reverse, what had been a four and a half climb turned into a sub half hour descent. The cold air quickly numbs the body and hands and the wind proofs that we had carried up the mountain provided us with some protection during the descent.

Arriving back into Fujinomiya cold and hungry we stopped at a Sukiya restaurant and enjoyed a mega large curry … Mmmm!

17,770 yen (incl tax) total for a triple room including breakfast